Yeah, yeah, yeah…we’ve all heard this phrase.  We may have even used this phrase.  But, goodness!  This phrase is so vague.  If someone ask you if you liked the food you just ate, that they prepared, shouldn’t you at least give them an honest opinion.  Not, “Eh, it’s edible.”  Did that tell me what you did like about the meal?  Did that tell you what you didn’t like about it?  What did that tell me?  Frankly, I can tell you honestly if a meal was good or bad and what I would do different to it next time.  I consider it being a good spouse, friend, daughter, etc.  If you ask, you better be prepared for the answer.  But, if I ask….I want a full disclosure….

With that being said, yes, dinner was not so hot last night.  I spent 30 minutes approximately dicing green bell peppers, cayenne peppers, chili peppers, yellow onion, green onion, peeling and chopping garlic cloves…granted I was able to release some frustration.  Instead of a vegetable casserole, I attempted to use the peppers as my green bean, squash, or broccoli.  Did not go so well.  I lost all of the natural flavors of the peppers, onions and garlic.  That to me is one of the best flavor combinations, and I missed that sorely last night.

Then, I decided to do something new with Brussel Sprouts.  I have been exploring this little green, not-so-desired vegetable, attempting to give it a chance.  I have par-boiled them and then sautéed them in some butter with sliced onion and garlic cloves (turned out amazing).  To be a bit healthier, I’ve oven roasted them to a nice crispness on the outside and soft on the inside, using some EVOO and Adobo seasoning.  Last night, I attempted to do the oven-roasting without the EVOO and with some smoked paprika and a little sea salt.  Definitely missed the EVOO to soften them up more and cook them in the oven.  They turned out crunchy in the center and just felt wilted in your mouth on the outside.  After last night, I thought I would give up on the little guys.  But, I think I will buy another bunch next grocery trip and see where that leads me.

So, I saved the best for last.  I mean let’s face it.  After reading the above, anything would be better, right?  I had this beautiful Ham Steak from Smithfield’s.  Oh, so succulent and flavorful!  I decided to make a glaze for it.  My over-achieving brain thought of doing something with Tequila for a glaze.  The one recipe I found combined coffee, tequila, brown sugar, ground mustard, and apple cider vinegar.  Well, people do make red-eye gravy here.  So, why wouldn’t it work?  I combined everything like a good  little cook, and began the reduction process on the stove.  The smell of all the ingredients together was repulsive.  It was literally not smelling appetizing in the least little bit.  I tried to stand it, but couldn’t.  Shortly thereafter, down the drain it went.  Yes, even the wasted tequila.  Wait….there’s more.  I did say I saved the best for last.  I was wanting something slightly sweet and spicy for the glaze now.  So I threw together 3 tablespoons of honey, 3 tablespoons of Sriracha, and 1/4 cup of Light Daisy Sour Cream.  Do a dollop, do do a dollop…you know you want to sing that song when hearing about Daisy.  Granted this came out super spicy and delectably sweet.  It had a wonderful flavor and the sour cream gave a nod to cool the Sriracha down a bit.  It helped the sprouts out a bit as well.

So find below the “edible” meal from last night.  But, if you take anything from this post this morning, do remember that we all have failures in the kitchen.  Although, we shouldn’t look at them as failures.  We should look at them as learning experiences.  What did I learn, you may ask?  It’s ok to experiment with recipes, but don’t expect a classic southern vegetable casserole to be able to be substituted with any old vegetable.  Don’t forget to use EVOO when oven roasting a vegetable!  Last, but not least of course, as good as I found the glaze for the ham to be, the hub thought it was too spicy.  Note to self, go easy on the spice for the not so spicy palate…….. 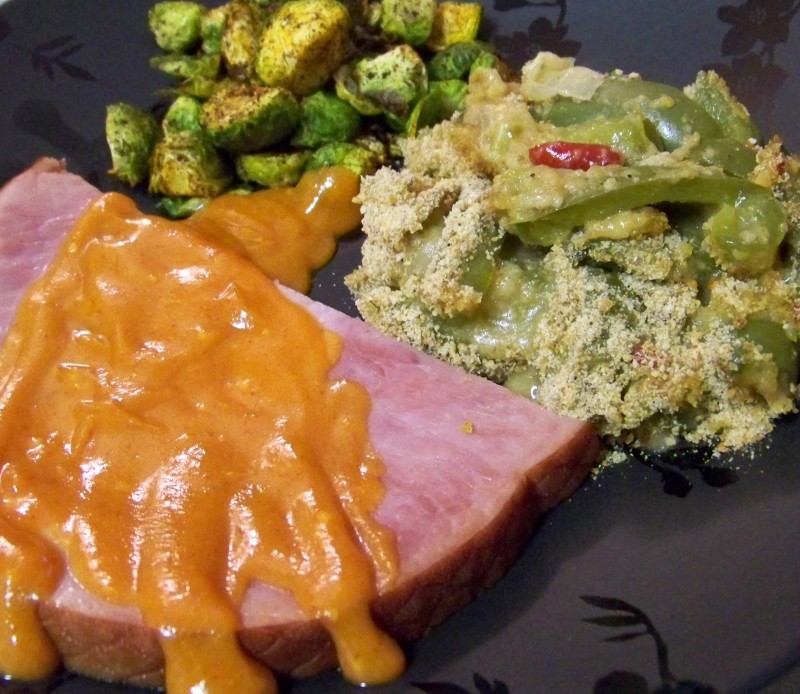 Leave a Reply to The Onyx Plate Cancel reply

Come and join me!

Come and join me!

Cheesy Pull Apart Bread and Spinach Dip for dinner tonight! Keto approved!
I love pretty and fresh food! Not just that, but it's keto and easy clean up with only using one pan!
Two is always better than one when sharing a big bed.
I made these today, and they were so good that I couldn't wait to share them with you! Keto Thin Mints - Check them out on the blog!
I will never ever claim to have a green thumb, but I sure am grateful for having family that does!
One of the many things I love about Graham is Steve's Garden Market & Butchery! All of these items were purchased there today. They are a truly amazing place to go and keep it local. NY Strips, shrimp, fresh asparagus and freshly made jalapeno poppers that were beyond delicious, for the win tonight!
If anyone wants to know the best part about this weekend, it was the husband's masterpiece in the smoker...from scratch rub, smoked to perfection, and seared on the grill to finish it off.
Missing Chips and Salsa while doing a low-carb lifestyle? Yeah, me too! So happy that I tried making the chips, and you should as well!
So excited to have Woman Chess Grandmaster Sabina Foisor on Sundays with Friends today! Her romance with Chess Grandmaster Elshan Moradiabadi is beautiful, and their cultures combine to create the most amazing dinner table goodness. Thanks for contributing, @sabina_foisor_chess ! Your recipe, write-up and photography are truly inspiring, just like you. ❤️ https://theonyxplate.com/2020/05/31/sundays-with-friends-woman-chess-grandmaster-sabina-foisor-and-her-moraso-polo-for-her-love/

Enjoy what you read? 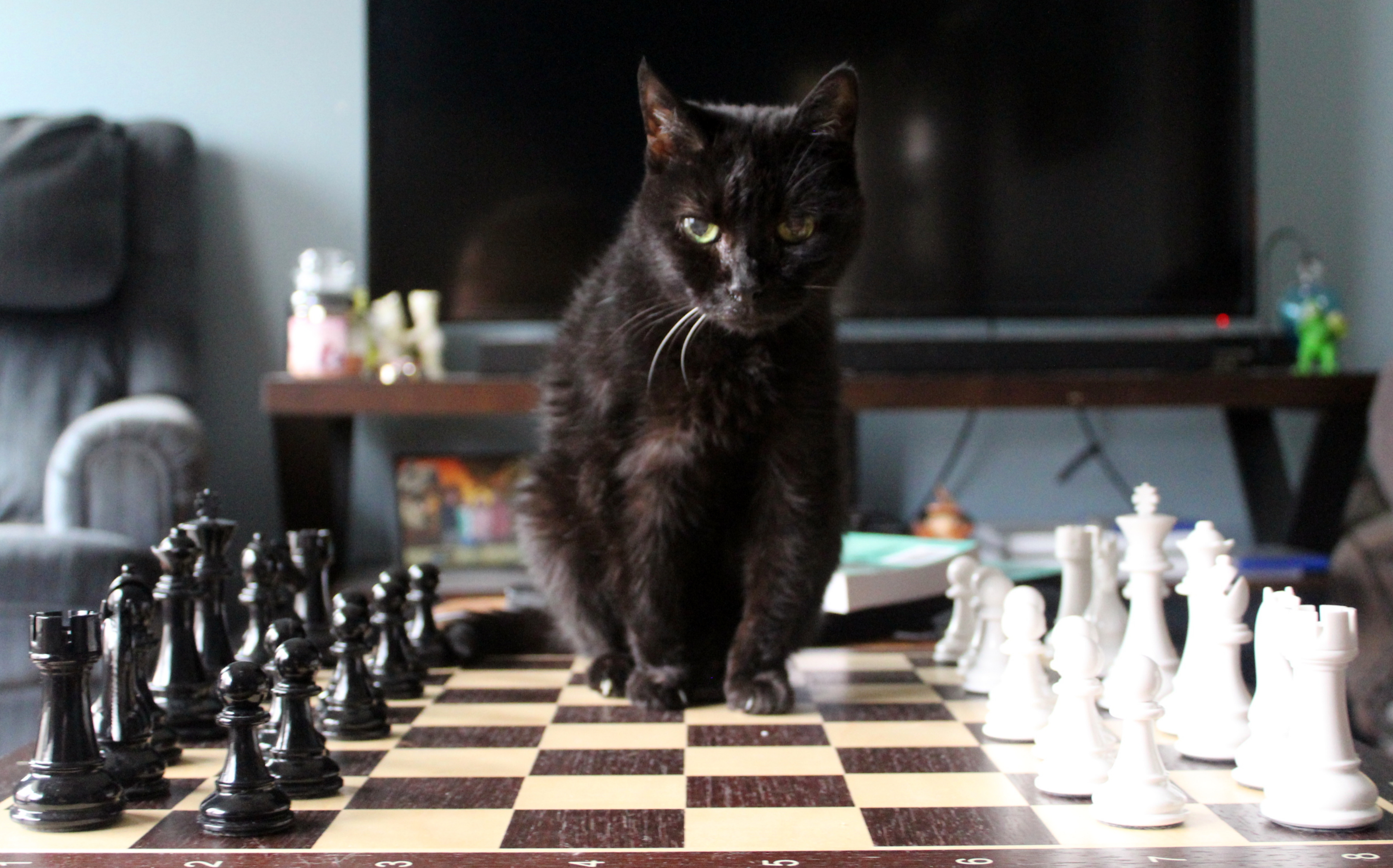 Your generosity is appreciated!

This is strictly for donations if you feel so inclined. No pressure, and thank you for reading! My best to you all!